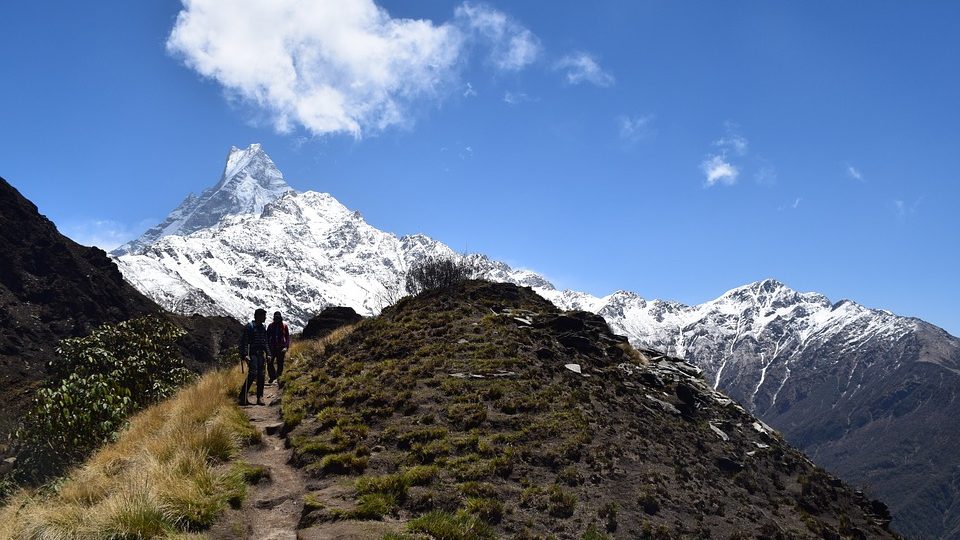 In this detailed article, we are going to discuss several adventure sports in Nepal.

Man drives a sense of pleasure in challenging nature in as many ways as possible. For a young and wild mind, it is all about overcoming the fear imposed by nature’s ferocity. And for the deadliest of the challenges, no place on earth is better than Nepal.

Nepal is like a fragile maiden, elaborately decorated in various shades of green graceful water bodies, and elegant landscapes, under constant surveillance of the mighty Himalayas that surround her. She wears a crown made out of ten among the eight highest peaks in the world.

The adventures the country has in store for you are unlike anything thing you have ever seen. Ten of the audacious extreme sport that Nepal has been listed for you below. 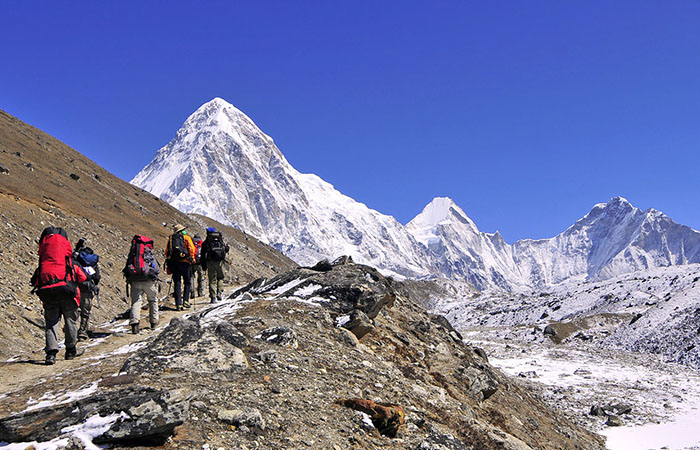 Nepal is well known among the trekkers and the mountaineers. Most routes initially begin with greenery and open into an entirely different scenery. This allows you to experience a diverse range of landscapes.

There are about 1310 peaks that have been discovered in Nepal. About 326 peaks are opened for climbing, the highest peak Mt. Everest being one of them. Not to forget, 8 among the 14 peaks in the world that measure above 8000m are situated in Nepal!

The number of treks Nepal has to offer are innumerable. The treks are categorized according to the regions they fall into, the Annapurna region and the Everest region is the most popular ones among the trekkers. Each region has its own unique characteristic that makes it distinguishable from the others. The vistas that each one of them exposes you to are merely impossible to compare.

There are a few easy treks in Nepal that have short walks and last for a few days and can be easily attempted by anyone of almost any age. There are others that are difficult and some even strenuous. These require a certain level of physical fitness and probably even prior experiences. The most demanding ones are mountain expedition. These require training and good skill and knowledge.

The journey to both, the base and the peak of the mountain takes strong determination and dedication. And the views and experiences you are awarded during the journey are totally worth all the challenges you put yourself through.

When you are trekking to Nepal, you will need different trekking equipment. Such equipment includes hiking poles, 2 person backpacking tents under 200 dollars, sleeping bags, hiking boots, and many more.

Trekking has been able to move the soul for many travelers from around the world. One of the top activities to do or adventure sports in Nepal can be considered trekking. 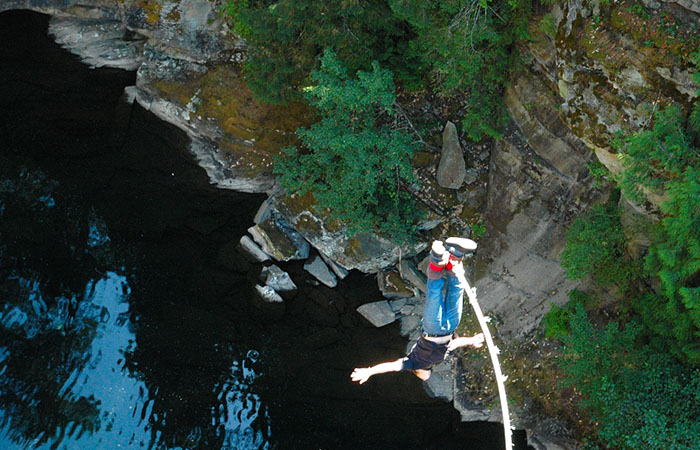 Another doable adventure sports in Nepal is Bungee jumping and swing. They are another very popular extreme sports in Nepal. The most thrilling one is situated at 3 hrs drive from Kathmandu near the Tibetan border. The Bridge is built on a gorge at a height of 160 m with the Bhotekoshi River raging below. The other Bungee spot is in Pokhara which is relatively less high but nevertheless stimulating.

The swing from this bridge is the world’s highest swing giving you the kind of adrenaline rush you probably have never experienced before. It is a free fall of 100m of 240 arches at 150 km/hr midst green hills and over a fast-flowing river. And because candlelight dates and beach vacations are too mainstream, you can now attempt Tandem Swing with your partner and share with him/her the most memorable experience of a lifetime. 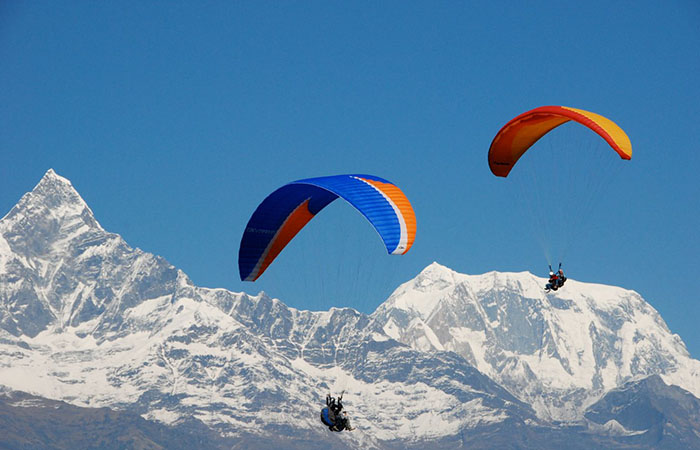 To experience that vastness of the otherwise limited perception of the world we manage to gather with a pair of eyes, everyone has a deep desire to fly like a bird. There is something extremely charismatic about the state of the sky that gives us a sense of sheer stillness and immortality, either of which we otherwise isn’t.

Nepal is one of the most popular destinations in the world for paragliding. Pokhara, among all the other places, sees the maximum number of paragliders. It has magnificent views and safe takeoff and landing zones. The Sarangkot hill situated on the outskirts of Pokhara is considered to be the best paragliding spot.

The 30 min flight takes you about 3000 m above the ground into a space fenced with the white Himalayan Ranges distant afar. Apart from the levitating sight of the mountains at the level of your eyesight, the view of the ground below is even more amazing.

The lakes and rivers draw an intricate pattern on the land as it paves its way through the hills, the alpine forests, and the rural settlements. It’s like the entire world has come into a standstill; like as if the time, for the first time, awaits you so that you can enjoy every single bit of the moment before it can convert it into memory as it ticks by. 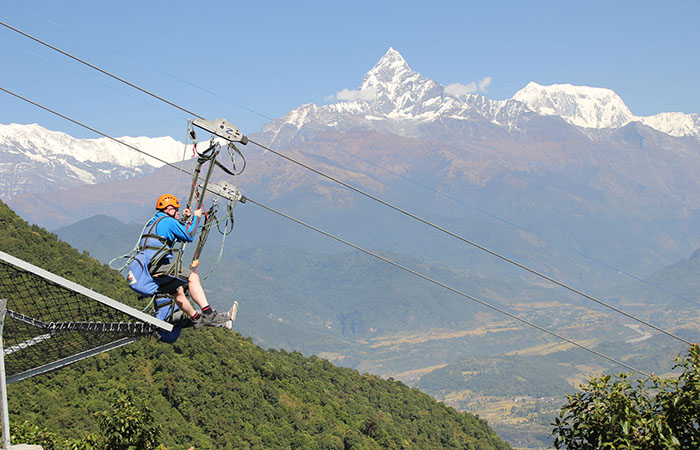 Zip-lining is just another sport assuring that man has the ability to turn anything to his entertainment. An act that initially started as a necessity to transports things using gravity from one hill to another became a subject of interest to some adventurous minds. They used this science to fuel their own adrenaline rush.

And so started the concept of zip-line the longest, fastest, and the tallest of which is situated in Pokhara, Nepal. The flight is from a height of 2000 ft at a speed of 100 miles per hour. It will take you around the Annapurna and the Machhapuchhre range as you descend to green hills and eventually to the lowlands.

There are many other relatively less thrilling but extremely exciting zip lines in Nepal.  If you are out of time to climb the mountain by yourself but seek to get a glimpse of its magnitude, Ziplining is the sport for you.

This can be regarded as the most thrilling adventure sports in Nepal. 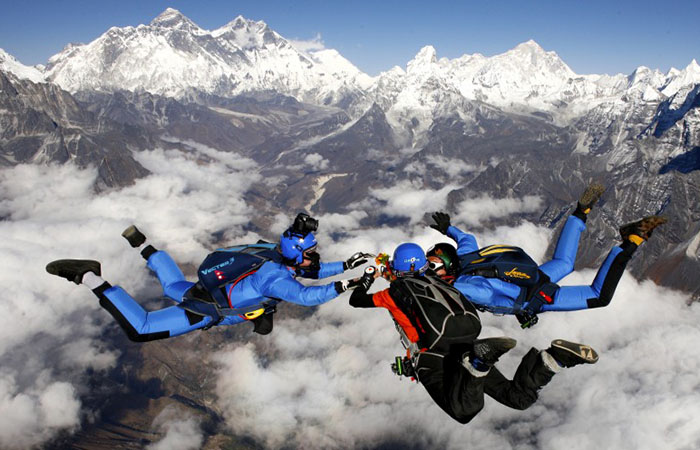 Before the sport can even be described, the name itself brings an idea of the craziest act man can ever indulge himself in. Because the audacity and the courage that takes in letting go of all the intuitions and taking that jump, simply cannot be underestimated!

The fact that makes skydiving a better experience in Nepal than any other country is because of the height it takes you to – the height of Mt- Everest which happens to be the highest ground any man can stand on. Also known as “The Everest skydive”, the world’s height aerial commercial event is a free fall from 23000 ft into a space guarded by the Everest Range.

Skydiving in Pokhara is from a height of about 11000-13000ft that gives you the best view of the Annapurna and the Machhapuchhre range. No prior experience is required to skydive, All you need a desire and a strong heart to take that jump into an unknown world you have never seen despite having lived in it. 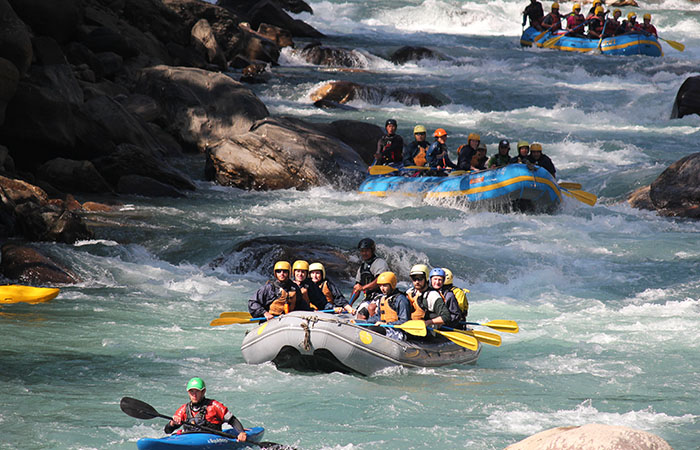 Nepal happens to be one of the richest countries in freshwater bodies. Almost all the rivers are sourced by the mighty Himalayas that makes up the entire northern region of the country. Not every river is fit for rafting and canoeing because of the velocity it gains from the steep descent it has to take while flowing from such a great height. The ones that are, are a dream come trues for every adventure seeker.

From a fast-flowing river with frequent rapids to a relatively easy river with few rapids, Nepal has rivers for all levels of rafters. The easy rivers require no prior experience. But if you are attempting a challenging raft, it is preferable to have some knowledge about it. The rivers will take you to some of the most exciting views of nature. The icing on the cake is the sandy beaches you will be spending your night in. 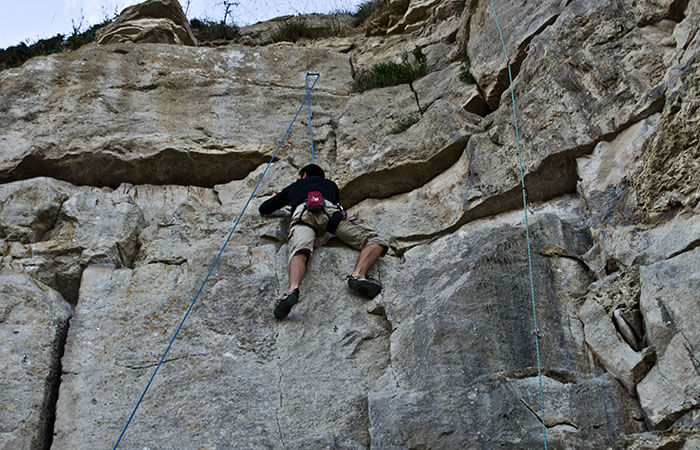 An adventure sport such as rock climbing characterized by a climb not towards any sort of external gain but internal satisfaction is popular among young minds.

This is a highly demanding sport that requires a lot of physical strength. There are about five rock climbing areas in Nepal, most of which are located in the north especially in the Everest Region. The canyoning spots are distributed among beautiful waterfalls overlooking the grandeur of forests.

The sport takes up so much of your attention barely leaving you with enough to enjoy the beauty around unless you have reached the top of the rock. Like every climb, the view from where you will be standing is totally worthwhile.

This adventure sports in Nepal is not for the faint-hearted. 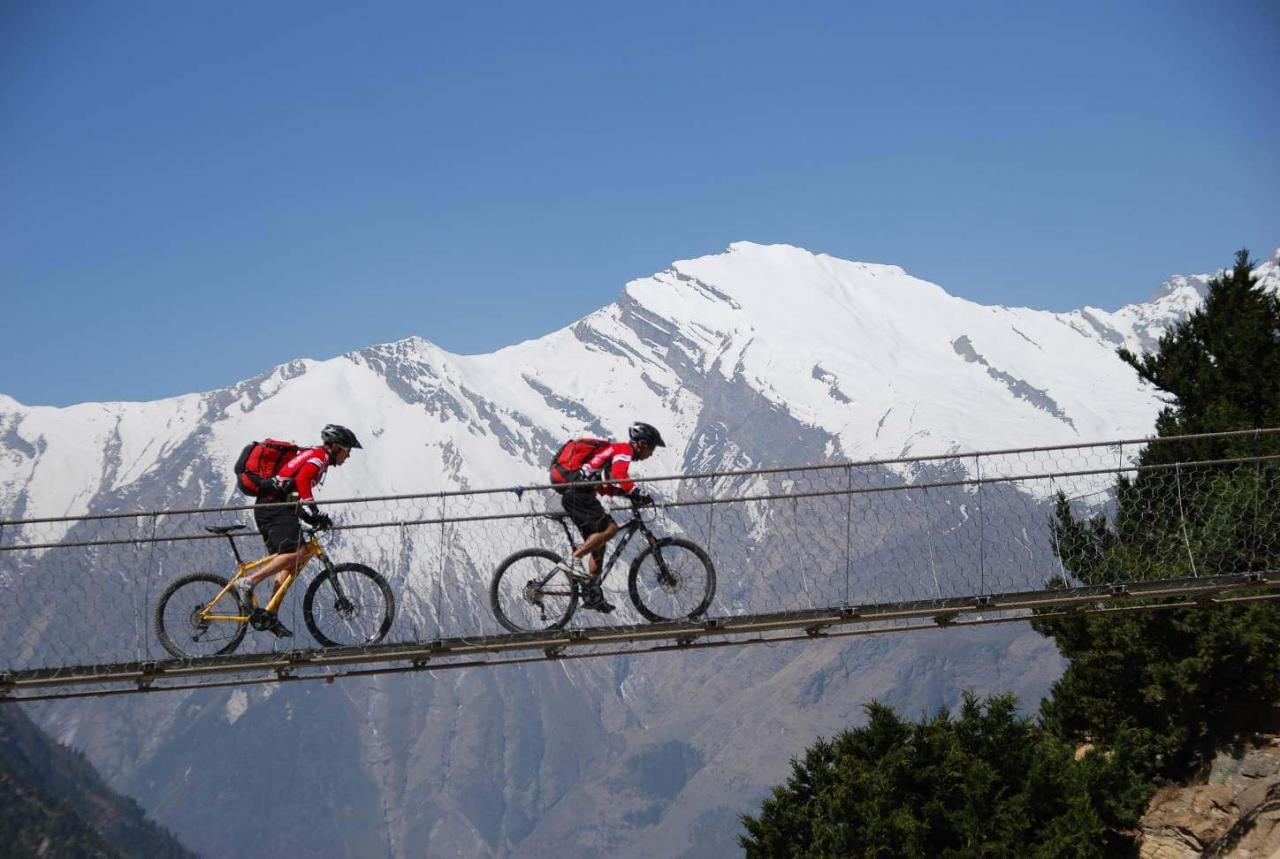 Further in the list of doable adventure sports in Nepal is Mountain Biking. This adventure is for all those who love the sport; allow your favorite toy to take you to some of the most strenuous, challenging, and deadliest routes as well as the most glorious, fragile-looking, and yet mighty views of Nature.

Mountain biking is a famous adventure sport in Nepal. The journey usually begins from Kathmandu and heads towards the Himalayas. There are several biking clubs that organize various biking events throughout the year. Otherwise, you can tag along with a group of your own and take a customized route of your preference to the mountains.

As you peddle your way through, you will get a chance to acquaint yourself with the lifestyle and culture of the rural population of Nepal. The ascend will award your arduous journey by taking you closer to the glorious viewpoints of the mighty mountains. 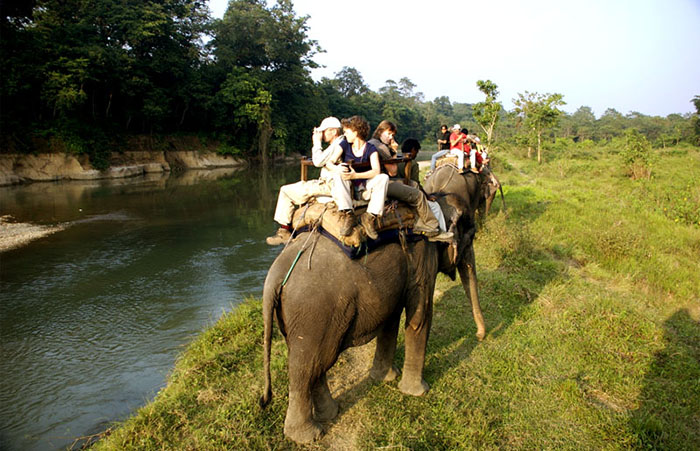 Last but not the least, Jungle Safari is another adventure sports in Nepal which can be done throughout the year. Once in a while, it’s pretty enlightening to meet the other species we share this earth with and are now being kept under protection because of the mess we have made out of this place we call home.

Chitwan National park allows Jungle Safari on an elephant’s back which is a source of the major attraction for tourism.  You can harmlessly get close to some of the rarest wild animals if you happen to be lucky enough to encounter them- The Bengal Tiger is one of the residents.

There is nothing impossible for a mind that hasn’t aged and a heart full of rage. And if you happen to be one of them, then Nepal is the place for you.

There is no reason for you not to enjoy this sport especially if you love every bit of the numbness adrenaline drugs you with.  Visit Nepal and add some of the most exquisite memories to your photo album that is a demonstration of a life lived to it’s fullest!

All of these adventure sports in Nepal can make the best out of your trip to Nepal. 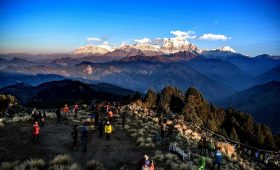 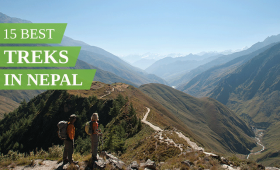 15 Best Treks in Nepal – Most Popular Ones