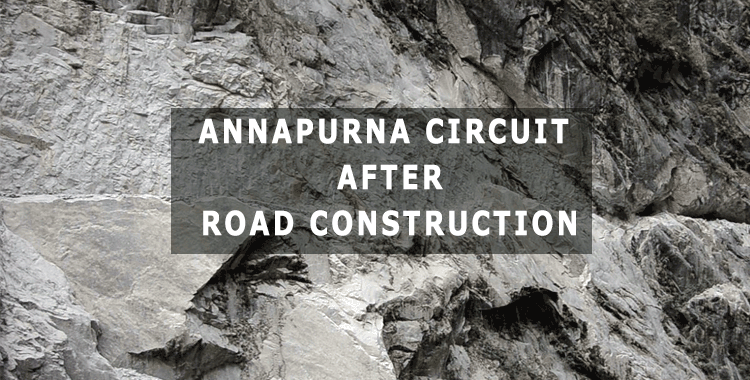 As soon as one hears the name Nepal, beautiful visions of snow-clad mountains, serene trekking trails, terraced fields, and traditional people cross their minds. For trekkers who have been coming to Nepal for the mountain adventures, the Annapurna region has been a treat offering the thrills, tranquility, and fun that only an ultimate trek can provide and the Annapurna Circuit trek is just that!

Annapurna range comprises of four peaks with the highest at an elevation of 8091meters being the 10th highest mountain in the world. Annapurna has been the ultimate adventure destination for trekkers with its deepest gorge and highest pass. After being opened to international tourists after 1980, this region has been making its own image as a culturally and beautifully pleasing trekking trail.

Annapurna circuit trek is the longest trek in Nepal that takes about 18 – 23 days to complete. The trail is 150 miles long and covers the majesty of the mountains, beauty of the hills along with the thrills and serenity of treks. With crystal clear skies and moderate weather most of the year, the best time to complete the trek is from March to May in spring and September to December in autumn.

The trek with its diverse terrain (from sub-tropical lowlands to alpine meadows and then desert plateaus) provides a truly unique experience. The trek is naturally endowed with the trails covered with orchids and birds of various species and sightings of animals like monkeys, leopards, and deer among many others. As you move from one village to the next, you will stay at teahouses and lodges getting acquainted with people of different ethnicities. The friendly people and their warm hospitality will make every day a fun, cultural experience.

The Highlights of Annapurna Circuit Trek

The circuit trail begins at Dumre at 605 m and ends at Beni. While many trekkers prefer to complete the circuit counterclockwise for better acclimatization, it can also be completed clockwise. The government decided to construct the road in the region in order to develop the rural areas and to make the amenities more accessible for tourists. The road construction had begun from both sides and has now reached to Chame in Manang and Phedi in Mustang.

The circuit was 23 days of natural trails among pristine valleys and scenic landscapes around the 10th highest mountain in the world. With the road construction, the trekking trail has been reduced to only 5 days of walking. This has ruined the natural feel and thrill of the trek as every point along the trek is easily accessible by road. Many believe that road construction has completely ruined the most beautiful and thrilling trek in the world.

Many trekkers are already switching to alternative treks like Manaslu circuit, Tsum Valley, and Nar Phu valley treks with off the beaten trails. The road construction has also been a blessing for biking companies as many bikers travel to various points in the trail through Beni, Ghasa, Marpha, Jomsom, and Kagbeni.

As an alternative to the roads, the government has been collaborating with Annapurna Conservation Area Project to open different trails off the road to preserve the natural and thrilling experience of the trek.  Natural Annapurna Trekking Trails (NATT) have been tried and tested by various trekkers who have done the circuit before and Annapurna circuit after road construction and find it even better!

For those who do not want to cheat on the duration, thrill, and length of the trip, these trips still provide the same excitement as the circuit did before the road construction.

These are various other reasons why the Annapurna circuit is still one of the best treks in the world.

The circuit trek can be extended to still isolated and thrilling points like Tilicho Lake and Dhaulagiri Icefall. The Natural Annapurna trekking trails with diversions and additional options provide trekkers with a number of other alternatives. The new routes have been highly preferred by trekkers and find the trek even more exciting. People should follow the map, pay great attention to routes and safety details.

Tilicho is the lake at the highest elevation in the world. It is also home to snow leopards and one gets to enjoy pristine and tranquil beauty in such elevation. One can even travel to Mustang from Jomsom.

You can still enjoy the traditional culture and lifestyles of the people on the trails.  You can take part in their daily lives to major festivals. One of such famous festival is the Yartung festival. It is mostly celebrated in Kagbeni, Mustang, and Upper Mustang. People are dressed in their traditional attires for the gatherings and celebrate with drinks. The highlight of the festival is the horse race where many men and women participate.

Muktinath is one of the holy sites for Hindus all over the world.  It is believed that people who travel to Muktinath and worship the god receive Moksha or salvation. It is a truly religious and serene experience to visit this holy site with hundreds of devotees, the natural spring, and the eternal flame.

The circuit trail is filled with places famous for their rich biodiversity with unique flora and fauna. The migratory cranes from Siberia can be spotted during the months of October and November. Musk deer, Blue sheep, snow leopard, Himalayan Griffon, Lammergeier, pheasants are some of the animals spotted on the trails.

These aspects of the trek are still intact and allow you to experience the trail like it was before the road construction. The locals are delighted with the benefits of the construction that lead to proper health facilities, trade routes, and cheaper goods among many others. The newly opened trails have even better additions in Annapurna Circuit after road construction than the circuit did before.

The new trail has been marked with red and white or blue and white paints to show the new treks. Following these would ensure that you stay on the off beaten trails.

Effects of the 2015 Earthquake

In 2015, Nepal was hit by an earthquake of magnitude 7.9 that lead to damage and loss of lives and property. Many places were hugely affected by the settlements, cattle to heritage sites. However, the trail and the buildings in the Annapurna region were largely spared by the earthquake damages of 2015. Different surveys and risk assessment teams have declared that only 1% of the route and 3% of the buildings were affected and are now safely operating their business.

Annapurna circuit trek is still the awesome, thrilling trek that it once was if you know where to find its hidden treasures. 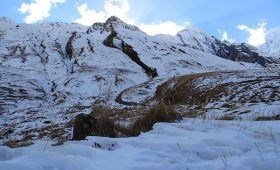 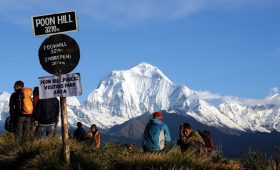 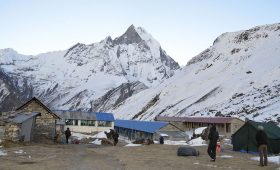