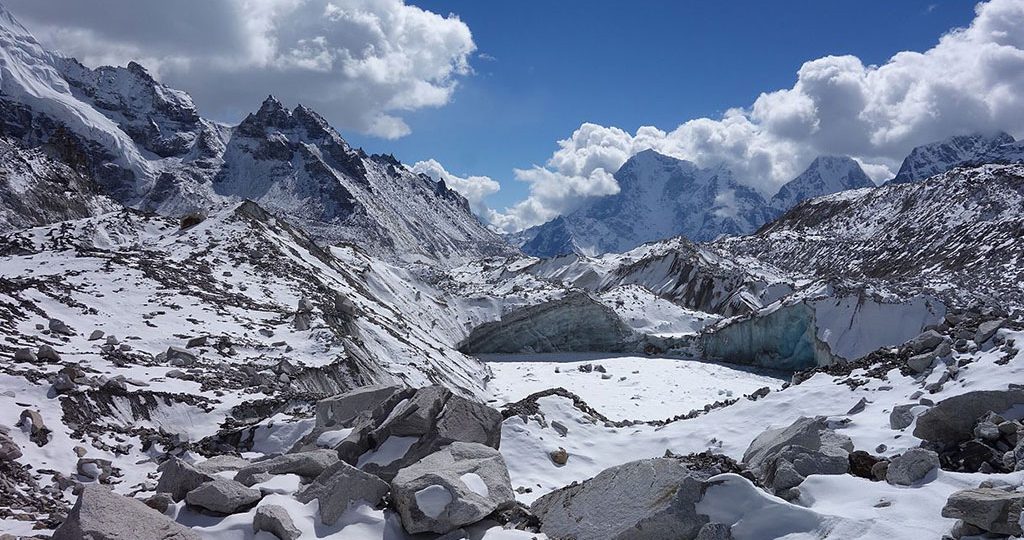 In this article, we are going to discuss Everest Base Camp Trek in April.

Trekking to Everest Base Camp or even climbing Mount Everest, for most of us, is a dream come true. If you are an avid trekker, you know how important it is. Frequent trekkers challenge themselves by attempting this peak in various seasons. But for a first timer, the best time to trek Everest Base Camp matters a lot.

The best time to trek Everest Base Camp would be the spring and autumn season. Spring or pre-monsoon falls around March-April-May while autumn around September- October- November.

April is mid-spring and is considered as one of the best times of the year to go trekking and experience the up-close clear view of the Himalayas. The weather and the climate are just perfect to explore the nature at this time of the year.

The warmer climate brings a lot of vegetation in the forests, especially in the hilly region. The forests turn green and rhododendron, bamboos, alpine and a lot of other trees add into the serenity of the place.

With warmer days around the corner, you might have to be prepared for several kinds of bugs. Repellents should do the job. On a brighter side, warmer days bring in a lot of exotic wildlife and migrating birds too.

Some trekkers prefer to book their trek after they reach to the capital. This could work for off seasons but as far as peak seasons are concerned, it is really a bad idea. Pre-booking means permits and other arrangements too. So you are highly advised to make pre-bookings.

Weather Conditions of Everest Base Camp in April

The weather at Everest is really unpredictable. The Everest Base Camp Trek in April though has never been affected due to the weather conditions. The trekking routes are only obstructed in case of heavy rainfall, as it results in landslides and avalanches in the higher altitudes. This causes the routes to be shut down temporarily. Other than that it is completely safe and April has to be one of the best times to trek the Everest Base Camp. The weather conditions are just perfect.

After October, the best season to trek in Nepal in April. No rain, no snow, and warmer nights are just perfect. The average temperature in April in the daytime is anywhere from 17 to 25 degrees and can down to 10 to 15 degrees in the morning and nighttime. There will be daylight of more than 7 hours. The skies are pretty clear giving you a picturesque view of the mountains and the hills.

Highlights of Everest Base Camp Trek in April

April, one of the best months bring bright sunny days and clear skies with mountain vistas to capture and treasure. Not to forget the unique traditions and cultures of the local people living in the area. Some of the highlights of Everest Base Camp Trek in April are enlisted below. 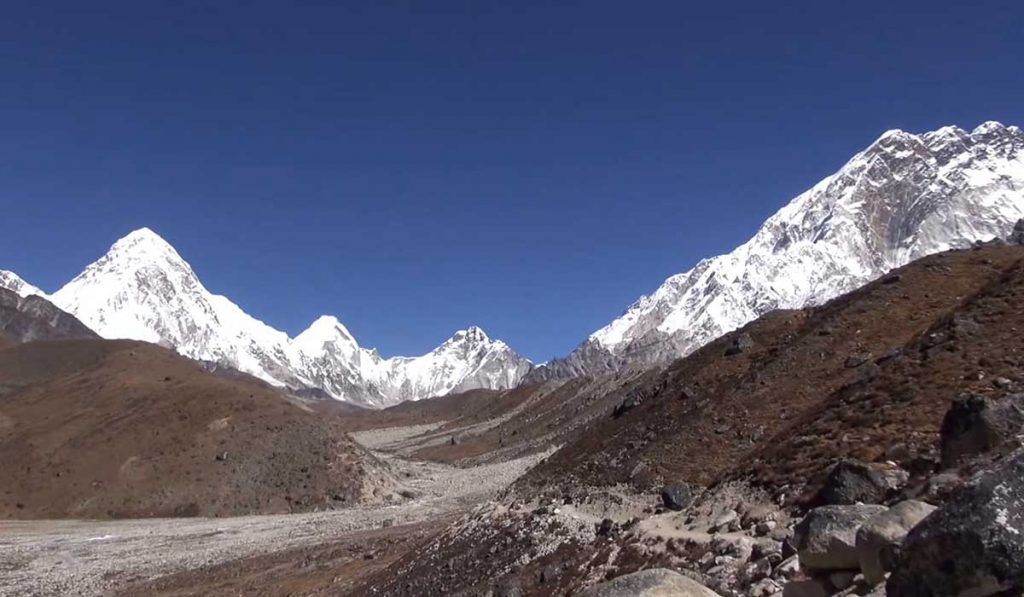 One of the most popular trekking trails in Nepal is the Everest Base Camp Trek. This trek gives you the chance to experience and explore the socio-cultural lifestyle, the biodiversity and the environment of the base of the highest mountain in the world, Mount Everest.

The route has been popular since the first climbers of the Everest back in 1953.

With spectacular views of the snow-capped mountain vistas, the landscape, glacial lakes, green forests and breathtaking views are highlights of this trek. The warm hospitality of the Sherpa people will make you feel like you’ve traveled to a heaven full of great people to treat you like their own family. You can get the experience of their culture, traditions, festivals, and settlements and can visit their traditional monasteries as well.

Some of the exotic animals you might experience on the way are musk deer, leopards, jackals, mountain Thar, Gray Langur and birds like Pheasant, Lophophorus, and long tails birds.

The trekking route passes through the gateway to the Everest, Namche Bazaar (3,450 m), a bazaar at the highest altitude. The Everest Base Camp trekking starts after a short flight from Kathmandu to Lukla.

Springtime is one of the two best seasons to trek here. There are a lot of choices you can choose from. 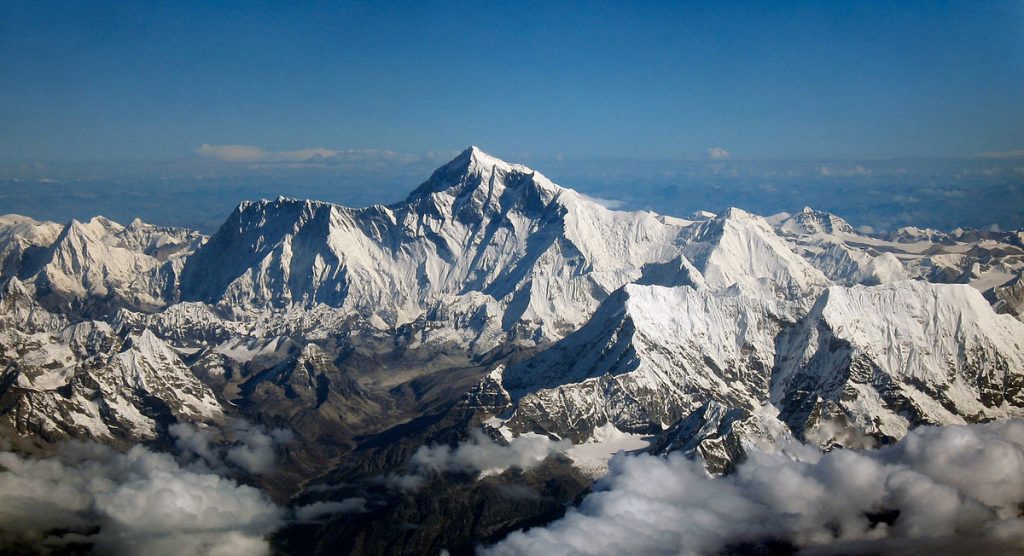 Everest Kalapathar Trek is another popular trekking route in the Everest region. The spring is yet again a perfect season to view the panoramic views of the mountain vistas.

The Everest Kala Pathar Trek starts after a short flight from Kathmandu to Lukla. The trekking then starts on foot from Lukla till you reach the base camp and then finally to Kala Patthar. You will pass through a beautiful Sherpa town, Namche Bazaar, which is also a trade center at the world’s highest altitude.

The spring season brings greenery so you will be passing through beautiful patches of birch and rhododendron forests. Exotic and rare wildlife like musk deer, mountain goats, gray langur, and other wild animals and birds such as pheasant, Lophophorus, long-tailed birds can also be encountered.

You will also get a chance to visit several Buddhist monasteries along the way. One of the famous monasteries that you will visit is Tengboche Monastery. The trekking route is inhabited by Sherpa people where you can experience their hospitality, culture, tradition, settlements, and lifestyle. 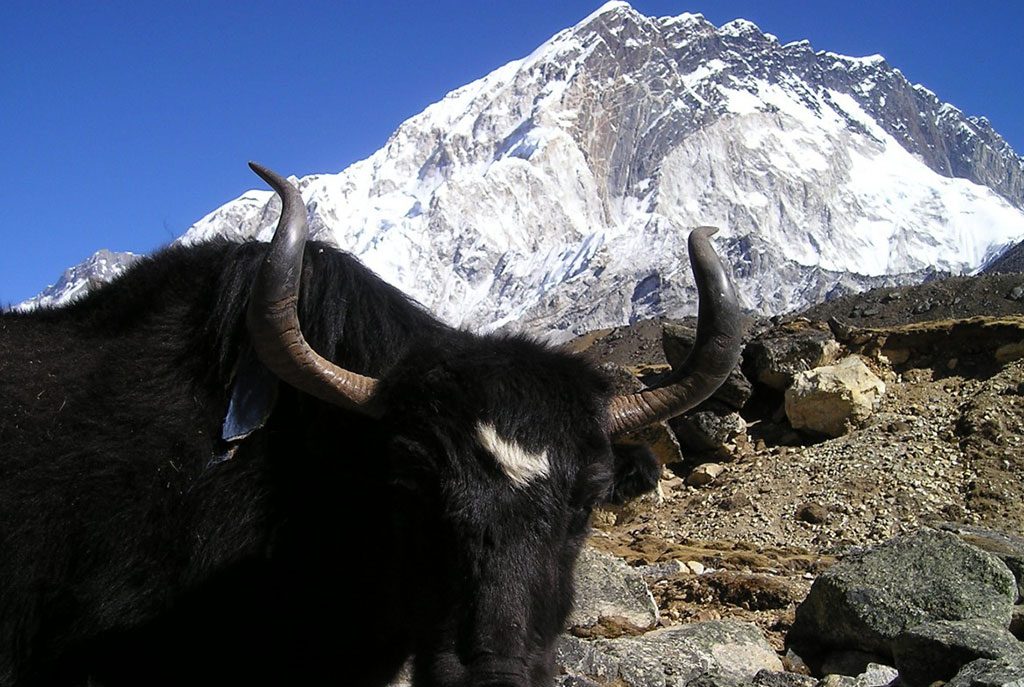 There are many routes to reach the base camp of Mount Everest and each of them has unique features. One of such exciting and challenging trek in the Everest region is Renjo Pass Everest Base Camp Trekking.

This trekking route gives you the chance to explore the Everest Base Camp through other exciting and unique places like Cho La pass and Renjo-La. The 20-day trek to the base camp is best for people who have a long time to spend in the Himalayas. This is a heaven-like experience for adventure lovers and photographers as April month has one of the best climates.

April brings a lot of greeneries in the hilly region, a perfect place to get your eyes the rest it always wanted. It is said that green color is best for eyes and with the cool air of the mountains, viewing such great landscaped vistas will take your stress and pain away.

The trek also gives you a chance to explore beautiful places like Namche Bazaar (the highest trade center in the world), Thame, and Lukla. The flight from Kathmandu to Lukla is one of the most adventurous flight you will take. You will get a birds-eye view of the Himalayan ranges.

You sure will enjoy the landscape, beautiful flora and fauna, mountain peaks along the trekking route.

Gokyo valley trek offers a spectacular view of the Everest region with deep lakes and amazing glaciers. You will be able to view a 360-degree view of the mountain range from the Gokyo ridge.

Reaching Chola pass at the altitude of 5,420 m is one of the most strenuous journeys in this trek but it is worth climbing for the spectacular views. In winter you will need crampons to reach the top of the slippery glacier. If you are trekking in April, you will not need crampons and it can be conquered easily.

The forests are now full of green vegetation and you can even spot exotic wildlife in the surrounding Everest region. Everest region is really a heaven for trekkers and photographers to preserve your wonderful experience for a lifetime.

The luxurious trek to the Everest Base Camp in just 12 days and reaching Gokyo Valley, Gokyo Lake, Gokyo Ri, and Chola pass is anyone’s dream come true vacation. It is a great choice for vacationing to the base camp of the world’s highest mountain.

Tips for Everest Base Camp Trek in April

April, the mid-spring season in Nepal, is just perfect for trekking the Everest Base Camp Trek. The temperature ranges from 15 to 25 degrees during the day and rarely freezing at night. The mornings can be a bit chilly.

The daytime, however, can be a bit hot.

No matter what the season is, the weather in the mountains is unpredictable so be sure to get prepared for any circumstances. The weather up in the Himalayas may change drastically so it is wise to plan your trip with some spare days.

We have listed out some of the important tips for Everest Base Camp Trek in April.

You have to be extra careful while packing your equipment and gears for Everest Base Camp Trek in April. You don’t want to miss anything important and carry something that you don’t need.

Spring brings hotter days and warmer mornings and evenings so don’t waste time taking a lot of unnecessary clothing with you.

We have prepared an outline of things that might be needed. Be sure to suit your needs.

April is one of the best time of the year to trek in Nepal. Autumn being the other. April is mid-spring time so the weather and climate are preferable at this time of the year.

The days are a bit hot and you will have at least 7 hours of light so you will not need to rush your trek. Most of the trekkers choose to start early and rest early. We too advise you to do so as it can get a bit windy during midday at this time of the year.

The clear blue skies and gorgeous mountains will take your breath away. You get the best experience in April. Picture perfect views of the mountain vistas can be expected this season. If you get lucky enough you may encounter some exotic wildlife as well.

Since the regular trekking season begins, it is best to pre-book your trek. You can contact us for any queries or information regarding the Everest Base Camp Trek or any other trekking offered on our website.

Is April the best time to trek Everest Base Camp in Nepal?

How is the weather and temperature like in April?

Everest base camp trek temperatures April are moderate and humid. The days are a bit hot than the nights and mornings. The sky though will be clear in this season so you will not experience any rain or snowfall. Between 1,000 m-3,500 m, the temperature could be anywhere from 20 to 25 degrees. At higher altitudes, the temperature ranges from 10 to 20 degrees. But, the weather in the mountains is quite unpredictable. If there is a storm, there might be snowfall. 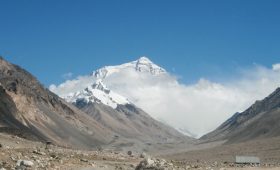 Everest Base Camp Trek in March 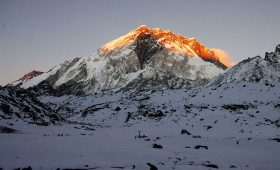 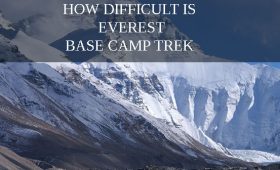 How Difficult is the Everest Base Camp Trek