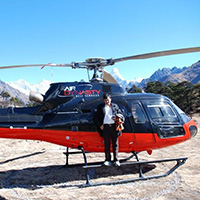 Mukti Pandey is the founder of Himalayan on Foot. He started Himalayas on Foot in 2008. Initially, he started off his career as a porter and then a guide. He also worked as a sales manager in a reputed trekking agency, before he started his own company.

Mr. Pandey is also secretary of Trekking Agency Association of Nepal (TAAN) for the year 2015-2017.

He has travelled to various places of Nepal. Apart from Nepal, he has travelled to Japan, Thailand, Malaysia, Hongkong, China, Finland, Norway, Germany, Belgium, France and USA.
He speaks fluent Nepali, Hindi, English and Japanese.

Mr. Pandey is the founder of Maya Nepal foundation, which has been running an orphanage for homeless since 2009. He is also the current President of Lions Club for Nepal.