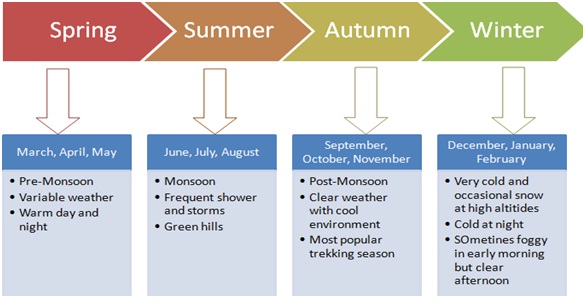 There’s a good time to travel to Nepal, and there’s the best season to make the trip. Think about it for a second- clear skies, mild temperatures, few crowds and stunning mountains views are just waiting for you.

I’m here to help you sort out the good season from the best seasons to visit Nepal.

Nepal can be visited all year round and the country experience four main seasons. Figuring out the best seasons to visit Nepal depends on factor like weather, tourist high season, annual festivals and where you’re going.

To help you decide when is the best season to visit Nepal, here are some figures of the different seasons. However, these are just to give an idea, since the weather in Nepal can vary depending on the region.

The best seasons to visit Nepal are during Spring (March, April, & May) and Autumn (September, October, and November).

The major Nepalese festivals are held during these seasons and pleasant weather makes it an ideal time for trekking in Nepal. Also, traveling throughout the country during this time you’ll enjoy the great views of Himalayan mountain peaks.

Even so, it is possible to visit Nepal throughout the year as Nepal has 4 seasons in a year. Each season has its own charm as given below: 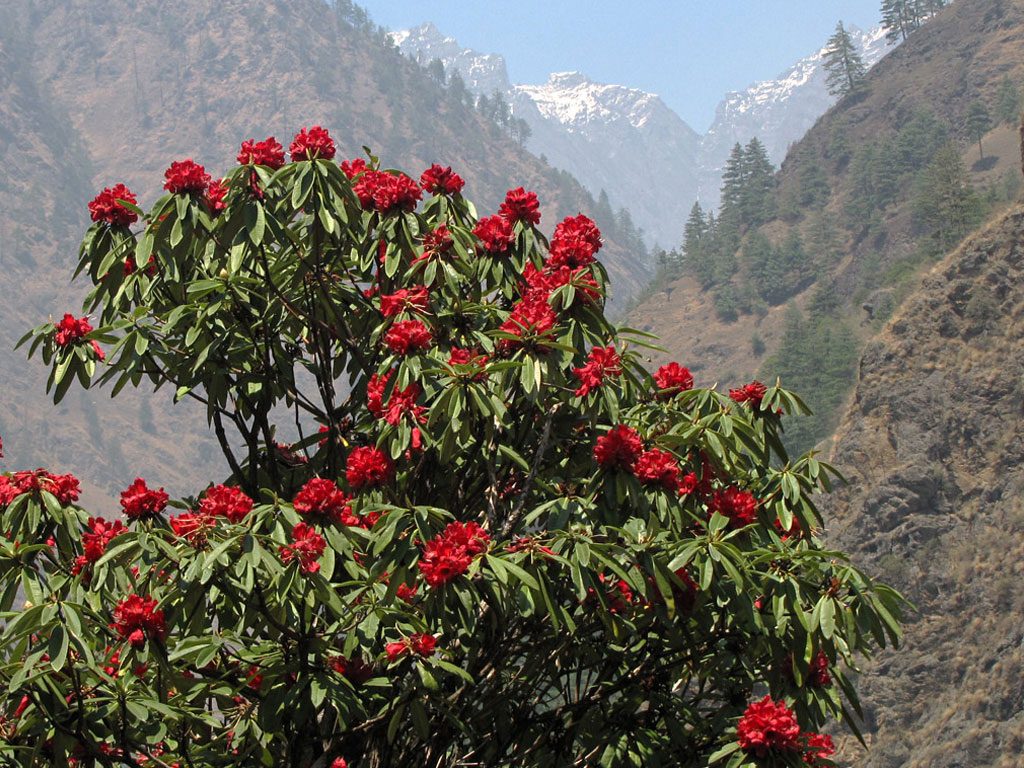 If you love enjoying nature and want to interact with the amazing wild lives of Nepal. Then, the best season to visit Nepal is in Spring seasons which starts from March and lasts till May.

Temperatures in spring are pleasant, but the air in the middle hills can be hazy. So, the views might not be good as in autumn.

Temperatures in Kathmandu and Pokhara can be up to 25-30 degrees and rarely drop below 11 degrees. If you’re visiting the Kathmandu valley, the warm and long days make this an ideal time to take in cultural sites.

Chitwan has warmer daytime temperatures of up to 35 degrees. Despite the increasing heat, this is also a good time to visit Terai and spot wildlife in Chitwan and Bardia National park.

During spring, you can see a wide variety of flowers blooming such as the national flower Rhododendron, magnolia, and other wildflowers in various parts of the country.

It is also a good time for high-altitude trekking in Nepal. As the high passes are usually snow-free and the mountain views are still clear in April. But at the end of May, the temperatures start to rise and the coming monsoon hangs over you like the threat. 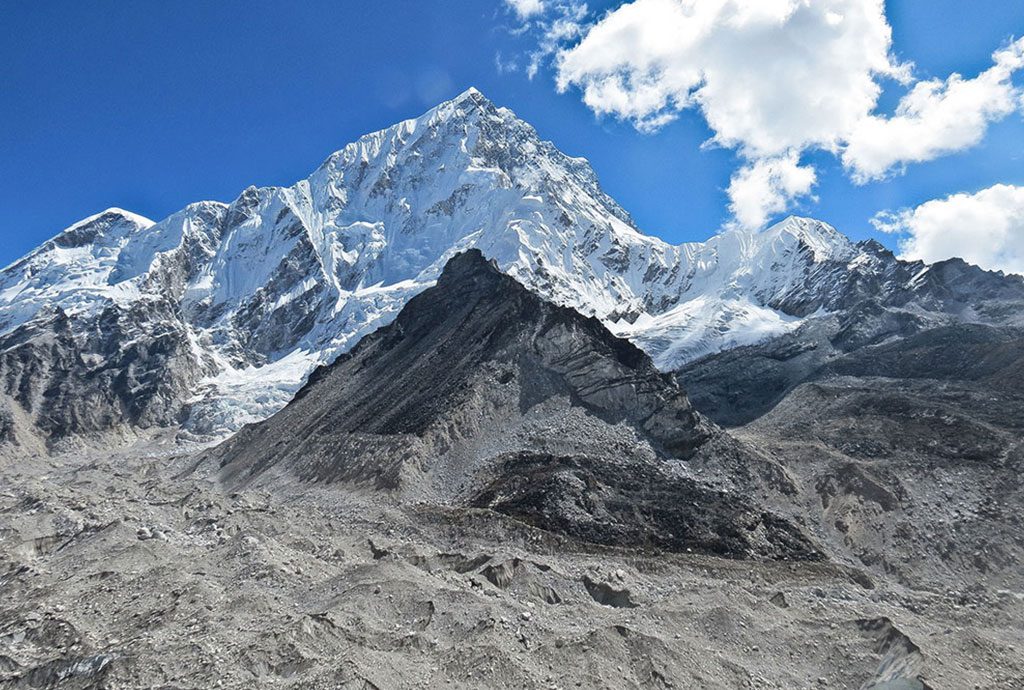 Summer is also the monsoon season of Nepal. The monsoon lasts from springtail to the beginning of autumn. During this time, it almost rains daily in this season with the occasional thunderstorm.

The monsoon in Nepal is slightly different than other parts of the world. As during monsoon it doesn’t rain all day. It rains almost every day but most of the rainfall at night.

Temperature lie between 20 and 35 degrees and even at night doesn’t fall below 20 degrees.

The summer season can be classified from June to August. At this time, you’ll experience a lot of downpours.

The downside of this season is a heavy rainfall that can cause landslide in some areas of Nepal. Sometimes, it’s very difficult to view snow-capped mountains surrounded by clouds.

Usually, non-professional trekkers are not recommended for trekking during the monsoon season. As monsoon months are difficult because of the muddy and slippery trial, fear of leeches, and other concerns.

Normally, traveling Nepal during monsoon is not recommended. But if you plan to visit Nepal you can do trekking in the north section of Nepal. As these regions (Upper Mustang, Dolpo, and Upper Manang) lies in the rain shadow area.

Also, the famous Everest Base Camp trek can also be done during the monsoon seasons. But you need to expect rain during the first few days at the lower altitudes and the weather will improve day-by-day.

Most rainfall is concentrated in the summer months, so you need to bring your rain gear with yourself. Besides this, you also need to bring insect repellents if you will visit Nepal on continual rainy days. 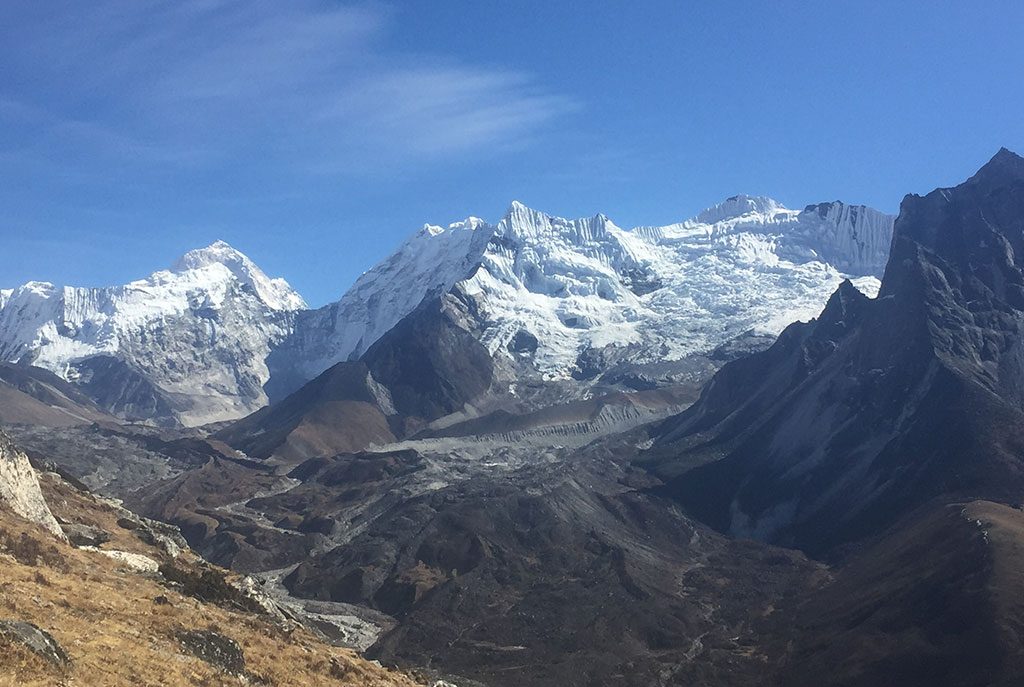 This season is the most pleasant one with the fewer chance of rain making it undoubtedly the best season to visit Nepal.

September, October, and November are the months of Autumn filled with clear and crisp blue skies. During this time number of tourists flock to Nepal, so it is advisable to do your flight booking as well as hotel booking in advance.

Autumn is the best season for both traveling and trekking as the climate is cool and temperate at this time.

Daytime temperatures are pleasant. Temperatures in Kathmandu reach up to 23 degrees during the day and can drop down to 4 degrees in November.

Pokhara and Chitwan are warmer with temperatures not dropping below 11 degrees and sometimes as high as 30 degrees.

Since the temperatures are excellent neither so cold nor so hot. Thus, trekking in all regions of Nepal is possible during this season. Especially, in the Everest region, autumn seasons are considered as the main trekking seasons.

The downside of this month is bigger crowds at most of the popular trekking trails and cultural sites. Accommodations prices get high and also get fill quickly.

During this time number of tourists flock to Nepal, so it is advisable to do your flight booking as well as hotel booking in advance.

December, January, and February are the months of winter. The days of winter are cool and sunny.

During the day, temperatures in Kathmandu and Pokhara can reach 20 degrees. But the night is cold and higher altitudes experience freezing temperatures.

There is often snowfall in the higher region of the country. Winter is an ideal time for the low-altitude trekking in Nepal.

Also trekking in Annapurna, Everest, and Langtang region in early winter has been quite popular over the past few years. But in mid-winter trekking becomes more challenging in the high altitudes with snow-fall followed by more winter storms.

In winter, it’s rare snowfalls in Kathmandu. So, you can go for the cultural tour of the capital, as well as Bhaktapur and Patan.

Winter is an excellent time to visit the Terai region of Nepal. Dry and pleasant weather conditions make this the best season of the year for bird watching in the jungles.

You also need to note that there will be a large temperature difference between day and night.

You need to consider the climate to specify the best seasons to visit Nepal. But also festivals play an important role to decide when to travel.

I hope this article best season to visit Nepal helps with some decision making. Yes, it’s very hard to decide when to visit a place, and of course sometimes if you have no choice about timing. But I assure you that no matter when you choose to visit Nepal, you won’t be disappointed. 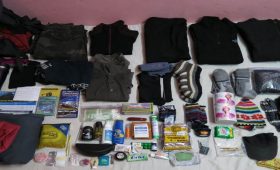 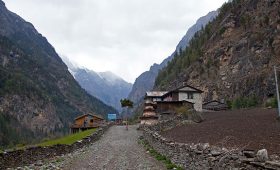 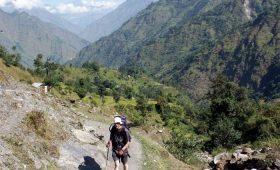 How to Trek Solo in Nepal