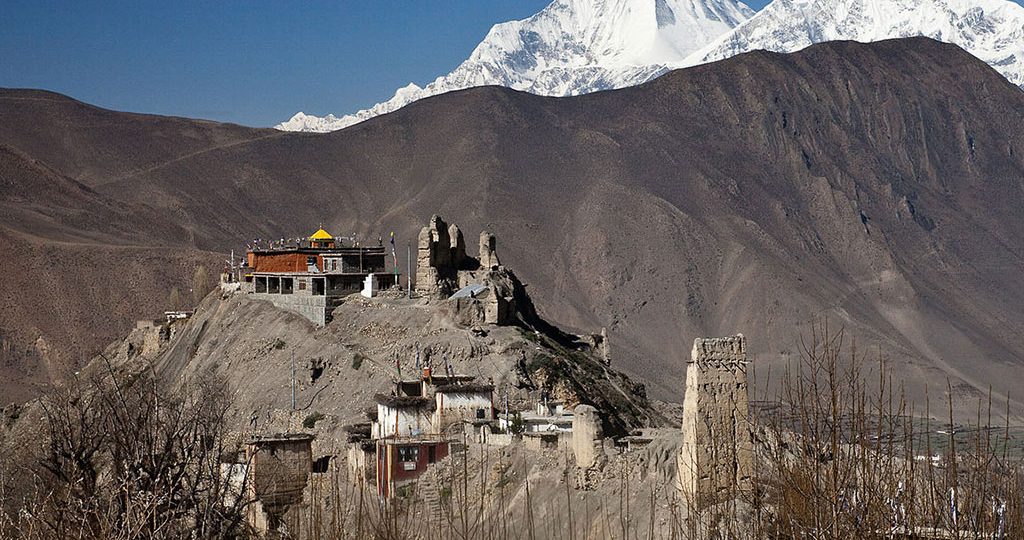 Most parts of Upper Mustang lies in the rain-shadow area, so you can trek to this place in monsoon season too. And, you do not have to worry about rain and slippery trails.

There is no fixed time to travel to Mustang as the flow of trekkers is somewhat the same for every season. The average Annual Temperature of the region is about 10.9 °C and Rainfall is about 307 mm. Due to less rainfall, monsoon season is not a problem for trekkers to trek in this place.

Mustang offers you different landscape and culture with reasonable cost and more accessibility. Most of the part in mustang is a dry barren landscape. People living in this regions are Buddhist and you will experience variety of traditions that they follow. You can also experience their most famous festival i.e. Tiji Festival in the month of May.

Mustang in Spring (April and May) 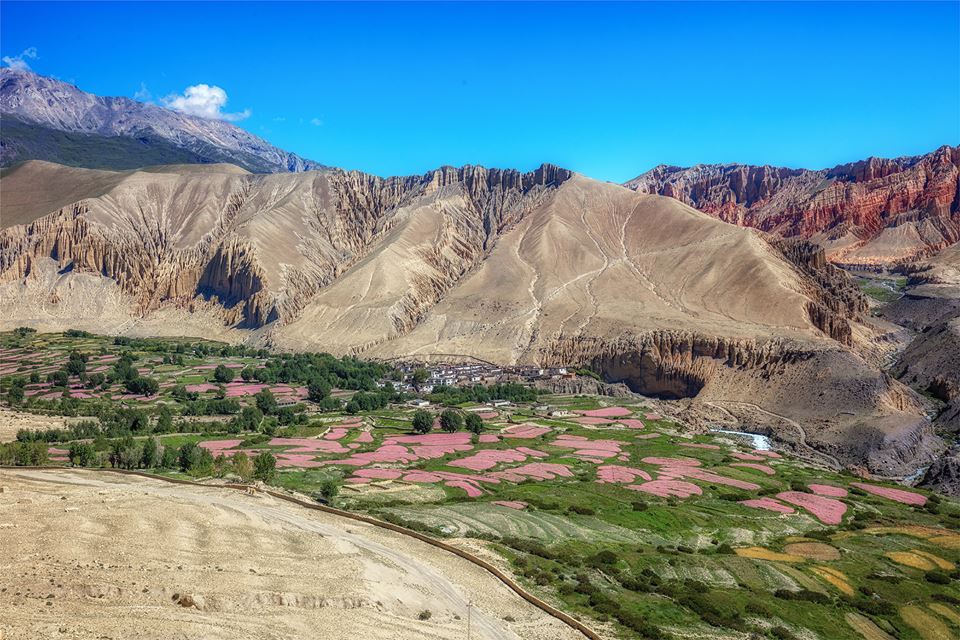 This season is model for you to hike along the Trans-Himalayan Region and ancient trading route to tibet. You will also explore breathtaking mountain views of Annapurna, Nilgiri and Dhaulagiri.

During this season, the average temperature at daytime is about 16°C to 22°C while -6°C to -2°C at night. During springtime, flow of tourist increases every year.

If you visit during this season, you will get to see many rare animals like wild boar, snow leopard, wild donkeys, Albino bears and musk deer. 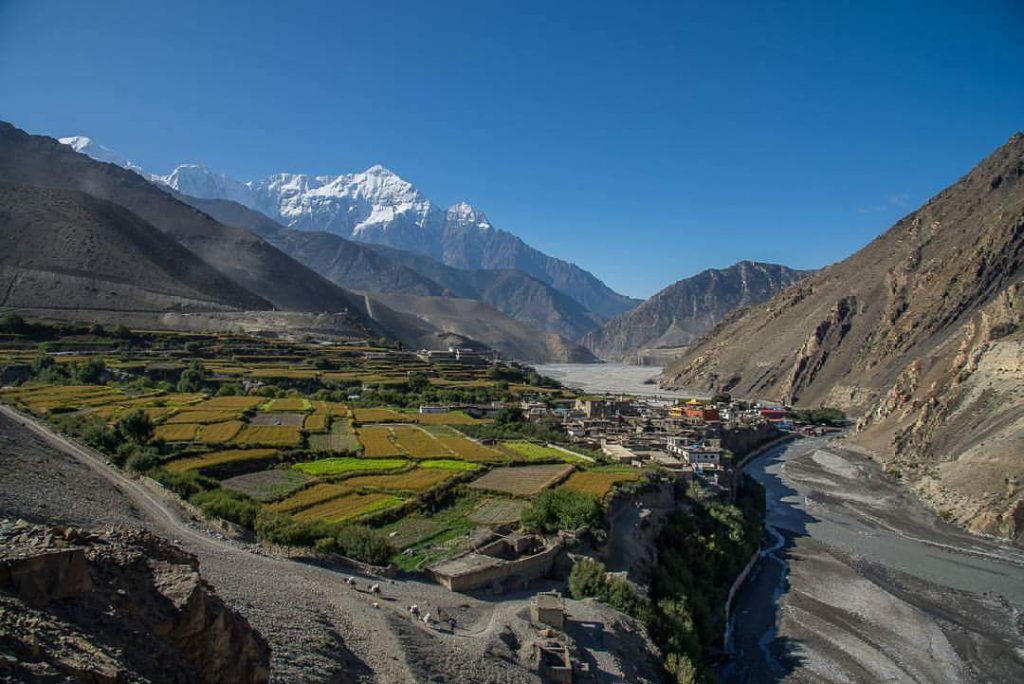 The least humid month is April. During this time of a year, you will experience clear views of 8 of the 20 highest mountains in the world.

The region experiences around 46.2% relative humidity. May is the windiest months of the year followed by April. Its average wind speed of around 4.1 knots (4.7 MPH or 7.5 KPH) is considered as “a light breeze”.

Maximum sustained winds are at their highest in late April where average top sustained speeds reach 9.3 knots. This is considered a gentle breeze. This place has around 18.5 to 20°C average temperature.

Mustang in Monsoon (June to September)

There is hardly any Monsoon in Upper Mustang as it lies in the rain-shadow region of Annapurna and Dhaulagiri mountains. This makes it the best trekking area for all who have to take their annual leave during the summer months.

The average daytime temperature ranges from 13°C to 20°C while the temperature drops down from -3°C to 0°C at night. The temperatures are highest on average in June at around 11.0 °C.

Since, the region faces no rainfall, you will enjoy the dry weather and moderate climate during this time of the year. 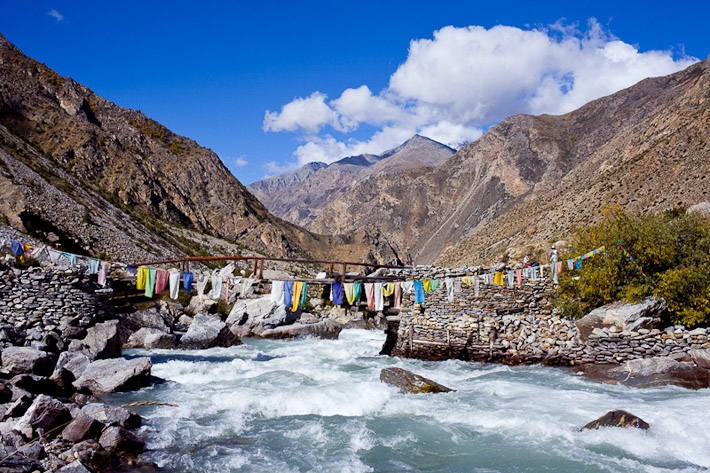 During monsoon, the trails will be wet and slippery. The warmest time is generally June where days are regularly around 32.6°C and at night rarely dropping below 21.8°C.

By contrast, it’s more likely to snow or rain in late july with an average of 6 days of significant precipitation the week of july 23rd. August has most humid month i.e. about 77.6%.

You do not need to worry about trekking to Lower Mustang in monsoon because it is not much difficult to trek. Make sure to wear good trekking boots and do not forget to bring waterproofs.

Mustang in Autumn (October and November) 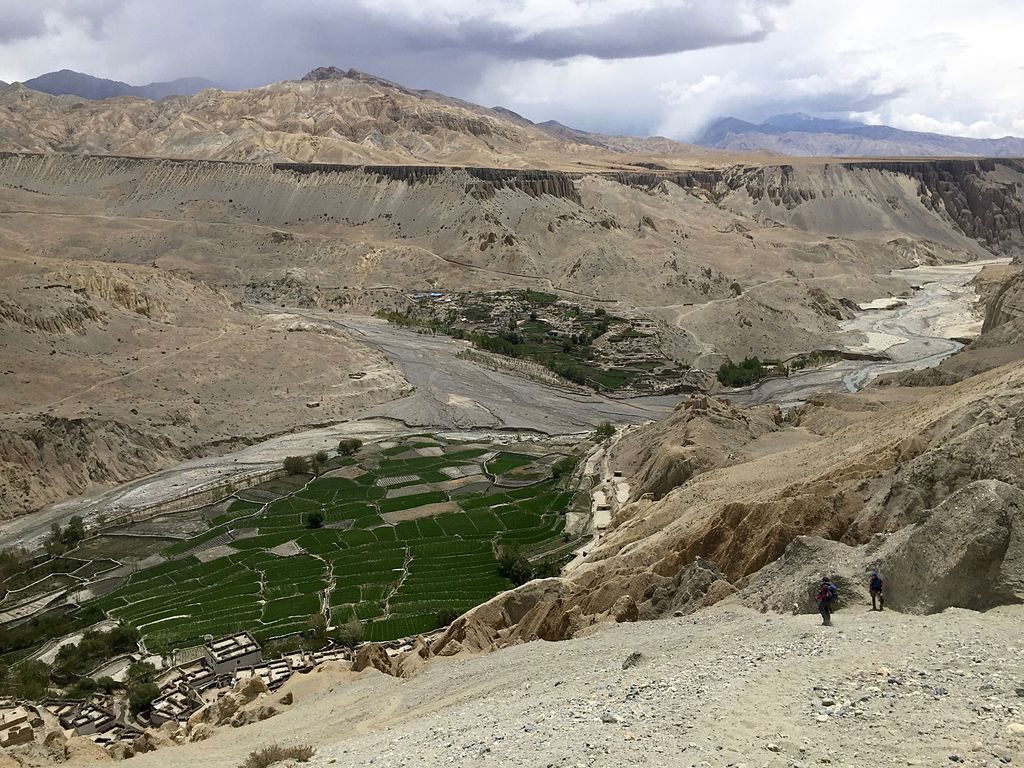 October and November are best recommended months to travel upper Mustang. You will get to experience a great view of the Himalayas and sight of Tibetan Plateau.

Generally, temperature range from 12 to 20°C at day and -8 to -4°C at night . Always bring your windproof gears. There is a strong wind from north of valley dominates the entire trails. 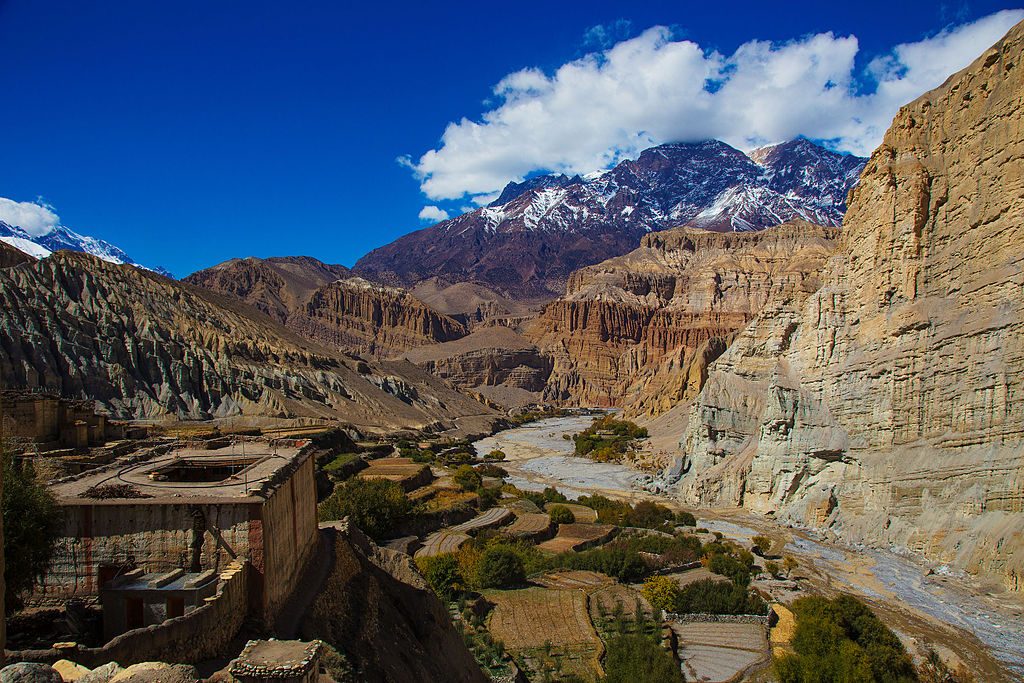 During this time of a year, the trail is full of trekkers. The average temperature of this season is about 8°C. If you are planning to travel during peak seasons, you should do advance booking. Due to heavy traffic, you may not find proper accommodation and food. So, it’s wise to book early. 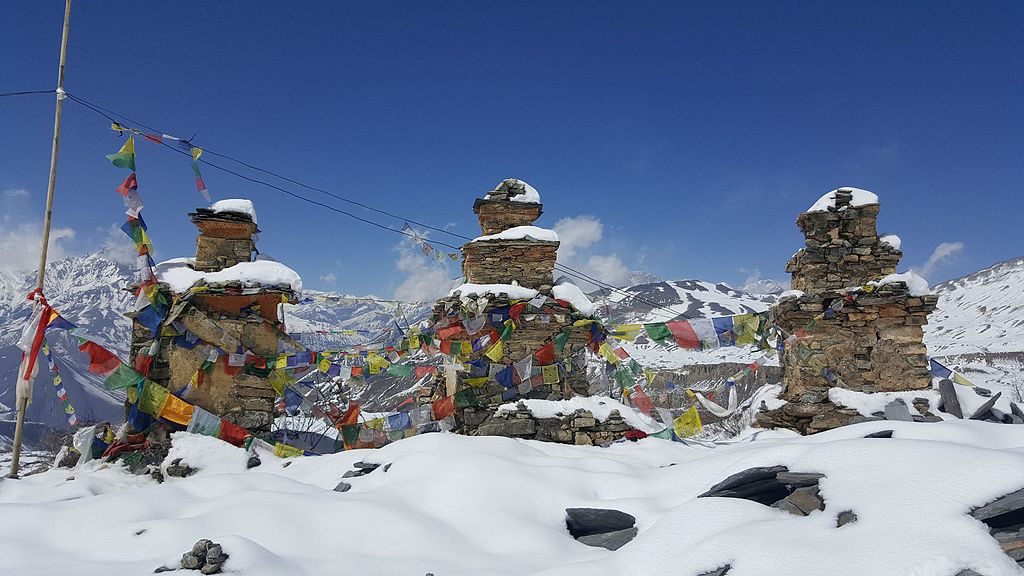 During winter, the weather can be cold as the forbidden kingdom has a continental climate in winter.

January is the coldest month of the year. Its average temperature is about 0 to 5°C a day and -25 to 20 at night. This place starts freezing as soon as the sun gets down.

During the winter, many people living in Upper Mustang move down. Due to extreme cold, they migrate to safe places until the cold fades away. They either travel to Pokhara or Kathmandu. 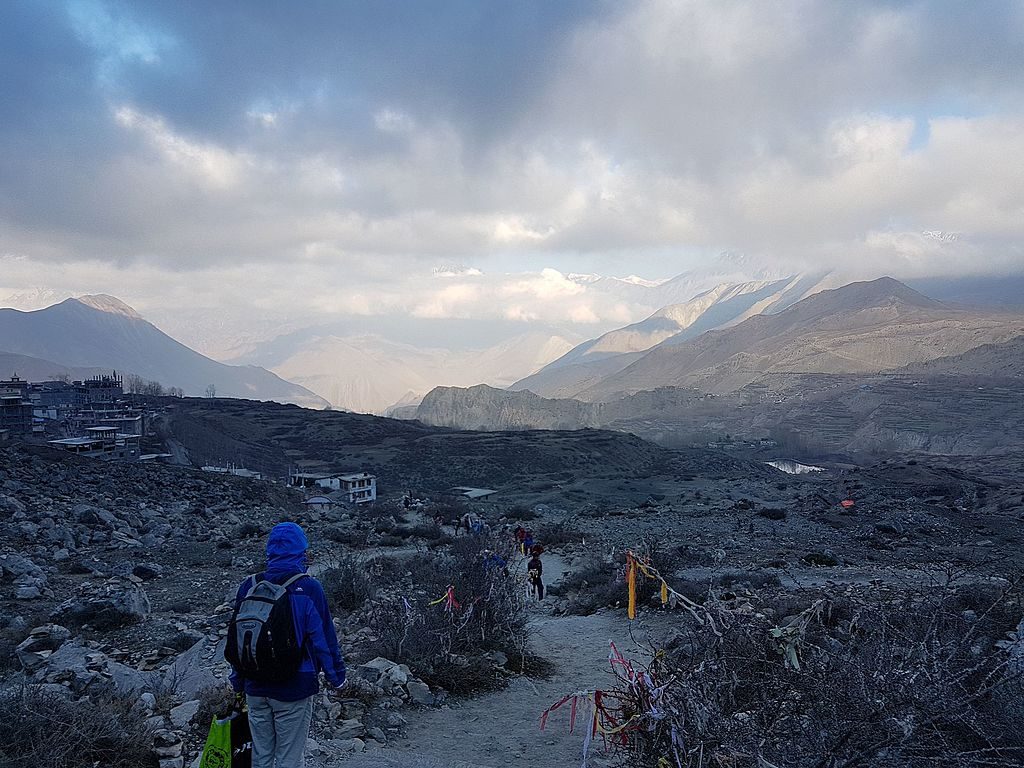 It is still a suitable time for trekking and hiking. But, “always listen to guidelines and take precautions”. The average temperature during this season is between 23.9°C and 19.1°C.

On average, it rains or snows about 1 to 4 times per month. These times of year are the second busiest with tourists. The months with the lowest chance of significant precipitation are December and January. The lowest chance of rain or snow occurs around early to mid-January.

Weather is somewhat cool during this time of a year in Jomsom and is perfect for those who enjoy the snow.

Places to Visit in Mustang: 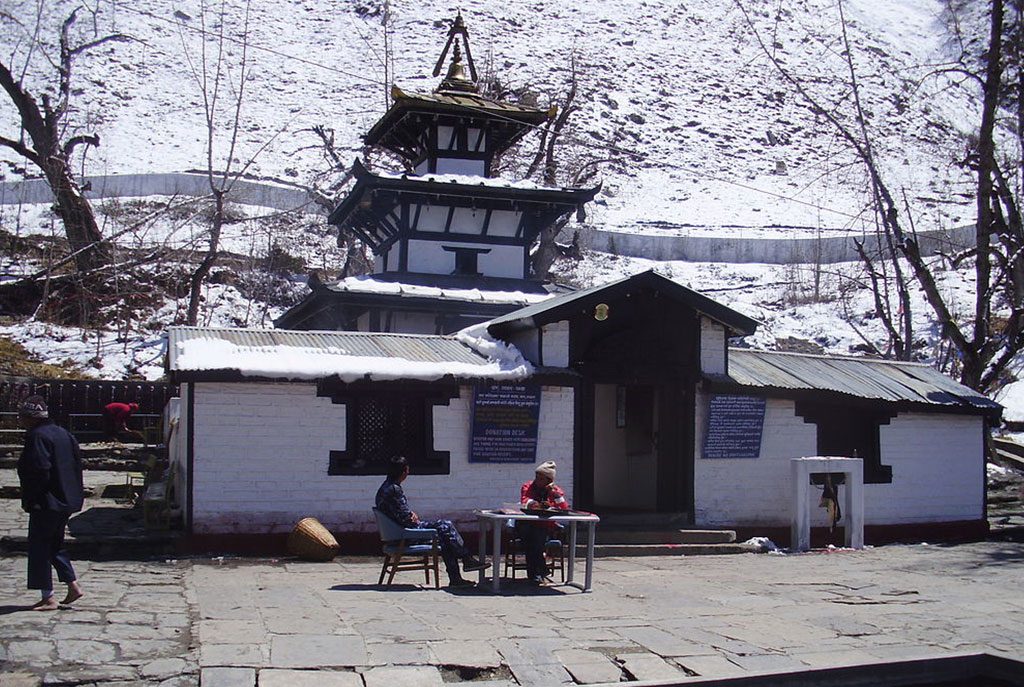 This temple is also called “Chumig Gyatsa”. This place is a symbol of religious symbiosis between both Hindu and Buddhist. There are 108 waterspouts around this temple where frozen water is flowing. People believe that who take bath in waterspouts and pond increase salvation. People travel all the way from Jomsom to Muktinath for trekking as well as spiritual cleansing.

It is a beautiful monastery with attractive paintings on its walls and roof. The whole monastery contains good looking wooden carved doors. The main entrance has 4 statues with a huge prayer hall. 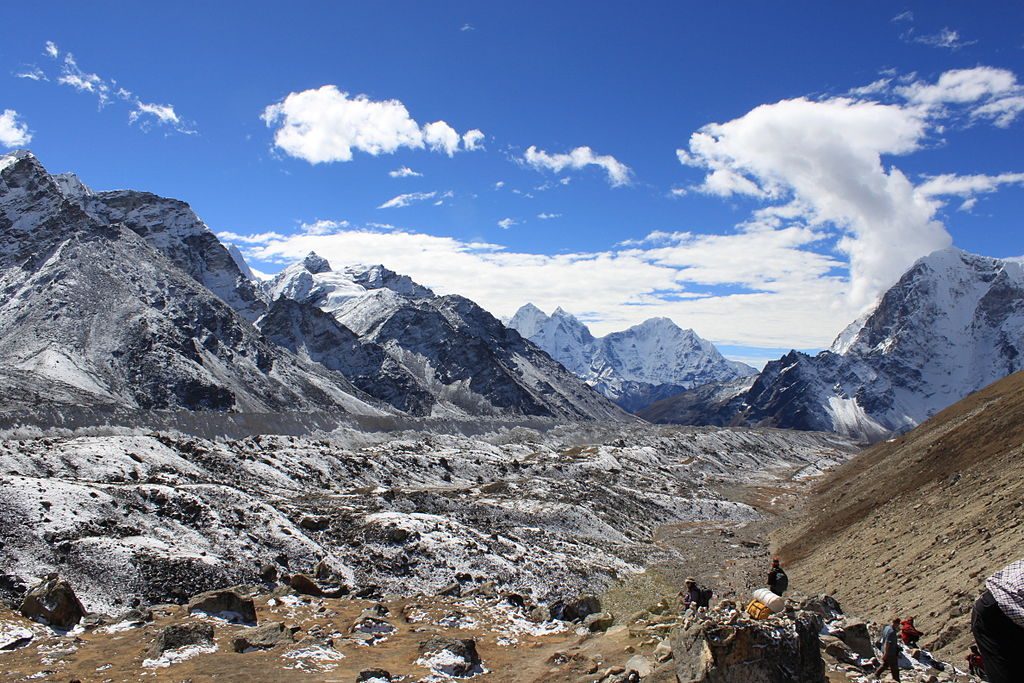 It is a remote area in Upper Mustang, 50 km from the Tibetan border and 250 km from the Indian border. This is also one of the best treks for you to trek from Jomsom. It is one of the preserved destinations as tourists were not allowed few years back..

This area has become one of the most popular trekking destinations at present in Nepal. The trekking to Lo Manthang involves trekking to the heart of Mustang. This trek is very easy and a permitted trekking route.

Chhairo Monastery is an art of 16th century which is part of present-day Mustang district.

Between Tujuche and Marpha a footbridge leads across the Kali Gandaki. Further, it leads to the Tibetan settlement of Chhairo. Exploring this Gompa unveils several mysteries of the people, their origin, and lifestyles. 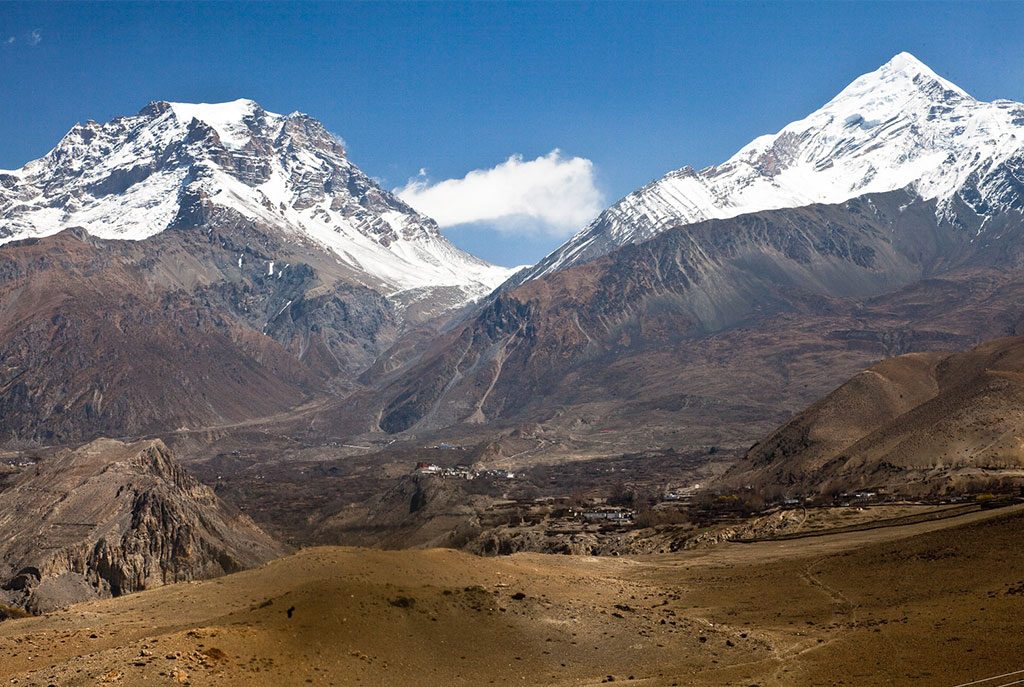 Jomsom is the best place to start trekking to the dispersed villages and stunning landscapes of Mustang . It has diverse landscapes and cultures to befriend you along the trekking routes. It gives spectacular insight into the way of life of rural Nepali people.

What is the cost of this trek?

Trek to Upper Mustang Permit Costs USD $50 for 10 days. But, if you plan to spend extra days in the region you have to pay USD $50 each extra day per person. Food and accommodation may cost around $25 per day. It depends on where you choose to stay and what you prefer during meals. For detail information check: cost of Lower lower mustang and cost of Upper Mustang trek.

When is the best time to Visit Mustang Nepal?

How long does it take to trek Upper Mustang?

It takes around 12 to 16 days to trek to Upper Mustang. However, it depends on the route you take.

How to reach Upper Mustang?

There are many ways to outreach Upper Mustang. You can take a road transportation to Jomsom from Pokhara or Kathmandu and then trek to Upper Mustang. Or, you can also take a flight from Kathmandu to Pokhara and then to Jomsom. From Jomsom you ascend uphill to the exotic villages of Mustang.

Visiting Mustang is one of the bucket list things to all the trekkers around the world. Thousands of trekkers travel from all around the world to trek to this beautiful place. Trekking to Mustang is open every time of the year. If you wish to go on this trek and are looking for best travel guides, feel free to contact us. 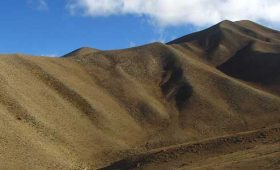 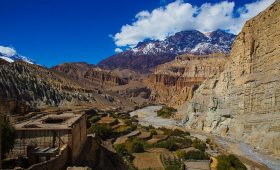 How to Get to Mustang Nepal 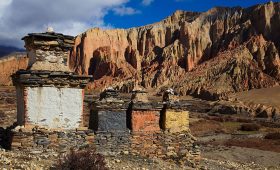